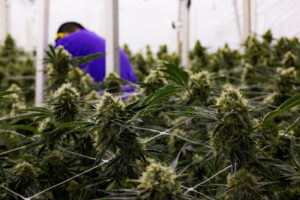 Freshman Republican Senator Tom Garrett of Virginia just took office in January, but has already made quite the entrance with his introduction of legislation that would move to decriminalize cannabis at the federal level.

The bill titled, “”Ending Federal Marijuana Prohibition Act of 2017,” is a revamp of a similar bill to reclassify cannabis from 2011. The original bill, which was introduced by the recent contender for the Democratic nomination for President, Independent Senator Bernie Sanders, was defeated.

But six years later, eight states have voted to legalize and regulate the growth, sale, use, and possession of recreational cannabis within their jurisdictions.

Senator Garrett’s bill is currently making its way through the appropriate committees in Congress. If eventually approved, the “Ending Federal Marijuana Prohibition Act of 2017” would reclassify cannabis, removing it from the list of controlled substances put in place by the federal Controlled Substances Act.

Cannabis could then be regulated in the same way that tobacco and alcohol are regulated at the nationwide level– it would be left up to the states.

To be clear, Senator Garrett’s law does not propose to enact nationwide legalization of cannabis. Instead, it would allow all fifty states to make their own decisions regarding cannabis without fear of federal interference.

The bill is identical to the original bill introduced by Senator Sanders a few years ago. But that bill did not receive any co-sponsors, nor did it ever get a Senate hearing. Senator Garrett’s introduction of the bill, however, has already garnered co-sponsorship from Democratic Senator Tulsi Gabbard of Hawaii, Republican Senator Scott W. Taylor of Virginia, and Democratic Senator Jared Polis from Colorado.

As a conservative senator and a former prosecutor, Senator Garrett seems like an unlikely proponent of this federal legislation. But the Republican is ready to make the issue an argument around states’ rights and job creation.

In a statement accompanying introduction of the bill, Senator Garrett said: “This step allows states to determine appropriate medicinal use and allows for industrial hemp growth, something that will provide a major economic boost to agricultural development in Southside Virginia. In the coming weeks, I anticipate introducing legislation aimed at growing the hemp industry in Virginia, something that is long overdue.”

Get Exclusive Invites to QC Parties and Events. Enter your email below:

Quality Concentrates are only to be consumed in accordance with state laws regarding access to cannabis. To visit our website, you must be at least 21 years old, or a valid medical cannabis patient. Are you eligible?